Jason Benn
You live in a what
I live in a 20-person house. Usually when this comes up in conversation people's eyes bug out and I can see them imagining a beer-soaked frat house, a den of nudist hippies, or - if they're from San Francisco - a hacker house (shudder). To be fair, there are many houses that fit these descriptions. The Archive, however, is not: my experience is of a group of reasonable adults who have all tried living alone and find it more fun, easier, and inspiring to live with a diverse group of values-aligned people. Surprising things become economical at this scale: we have a chef come every week, for example, and we recently bought a sauna; and the only people who share rooms here are the handful of us who choose to do so to save money.
The time is ripe for a resurgence of communal living. Adults the world over are lamenting how hard it can be to make new friends, the Internet and social media exacerbate our social isolation, and older generations continually remind younger generations to spend more time with their friends and less at work. As someone who isn't great at staying in touch with old friends and has been lonely before, let me assure you - coming home to a house where close friendships just happen without any effort on my part is wonderful. The density of experience here is comparable to college.
"Sociologists since the 1950s consider... three factors crucial to making close friends: proximity; repeated, unplanned interactions; and a setting that encourages people to let their guard down and confide in each other" - New York Times
So naturally I've been researching the lifestyle further. What do the houses with the most fulfilled residents have in common? What are the secrets of long-lived urban community houses? What's it like to live in a large community, say at the limits of Dunbar's number (100-150)? How can communities support members with families? I've been gathering as many data points as I can find by interviewing community dwellers about their experiences. Here's a working list of best practices:
[#]Principles for a great community
Many more to come! I just started this project in late July 2017.
Key research themes
My interviewing project to-do list contains an expanded list of the above questions.
[#]Want to contribute to these principles?
Great!! Let's hang out: message me on Facebook.
Updated: August 13th, 2019

One of the unique things about the Archive is that this is a place of focus, and we want housemates to lead their own lives. However, we’ve found that a fairly minimal level of commitment is required to keep the house running smoothly and feeling close:

1. Vote in #the-senate Slack channel so that decisionmakers are unblocked.

At minimum, vote on every proposal in the channel before midnight Thursday nights and Sunday nights.
Votes:
Results:
This system has totally changed the Archive's culture: we no longer need to have meetings (!).

2. Spend an hour doing whatever you want in a common space on Thursday nights.

Specifically, between 7:30pm (House Dinner) and 10:30pm (around when people head to bed). The idea here is to make Thursday night a night for community while still accomodating a variety of schedules. This is primarily for housemates, but significant others are also welcome. It’s OK to miss if you’re out of town (duh) or following your dreams. Also, please respect that others might want to read/relax/be introverted during this time: try to make sure that at least one common space is safe for chiller activities.
Your attendance doesn’t have to overlap with House Dinner, but the strongest community houses do all eat together regularly!
Unless otherwise specified, House Dinner is BYO. (If you’d like to procure dinner for everyone and Venmo them for the cost, check out the Archive favorite orders spreadsheet).
Reasoning:

It’s OK! A housemate’s energy for the house will ebb and flow as their life gets more or less hectic; this happens to everyone. As long as you’re not consistently missing the above two commitments, please don’t feel guilty about it, and talk to someone who’s been at the house for a while if you do. Alternatively, we might be able to rejigger hangout time to work better with your schedule.
If you are consistently unable to participate, then eventually there should be a conversation about whether the house is meeting your needs. There are ways to participate in this community that don’t involve living in the house - becoming a Fellow, for instance, or moving to a quieter/smaller house nearby - thereby freeing up the room in the main house for another potential housemate.
Tips for when you’re feeling disengaged:
Reasoning:
Questions to ask other communities September 5th, 2018
Here's an extended version of the list of questions on my main community page.
Wishlist
We would benefit a ton from talking to anyone who's lived anywhere like one of these places. If you have any leads, I'd love an introduction: [email protected].
Interviewed:
Offers:
Dreamship systems doc August 9th, 2018
This house is so J it hurts even me. Some of these processes don't even seem like they were problems first (like the water boiler) but if they pull it off then power to em.
Some of my favorite ideas from here:
Dreamship systems doc 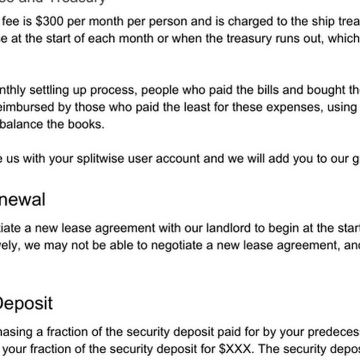 https://docs.google.com/document/d/1bqtc9GchiqSB13kK1M7Nez9y1U6ZCs_EAYMN7Ahz0rs/edit#
Welcome, to Dreamship, shipmate! Here’s what to know to make your voyage a success: Rent Rent will be $XXX/month per person. In addition, a $300 per person Dreamship All Inclusive Monthly Amenities Fee will cover Utilities, Cleaning, Shared food, and other spending as the house may decide. We c...
The Frequently Overlooked Path to Happiness - Daniel Gross August 5th, 2018
Identify people that excel at the things you want to excel at, and surround yourself with them. Communal living is a brilliant mechanism for enabling this. A good argument for a larger community, in my opinion.

The Frequently Overlooked Path to Happiness

I’ve found that one of the most controllable aspects of my happiness and acumen is the people I spend time with. Because many of us are in a good-not-great situation in this regard I suspect many might not realize how deceptively important it is. I’ve split my interactions with others into three:
Routine People. Those that you interact with without planned effort. Your spouse, co-workers, neighbours and family fall into this bucket. Do you enjoy being with them? Do they motivate you to be better? Think smarter? Be kinder? Most of your life will be spent with these people. You should have extremely high expectations of them. If they aren’t stellar, you should treat that as an urgent problem.
Out-of-routine People. Planned social interactions. For example, dinner with a friend or a trip to see family in a foreign city. Key questions to think about: Do you have a list of people that you’d like to spend time with? How often do you try to meet them? Not sure where to start? Think about qualities you want to have. Then think about the best person who excels at that virtue in your extended friend group. Want to become more empathetic? Spend more time with very empathetic people.
Once you find people that you really enjoy being with, you might figure out how to turn them into Routine People. For example: move near friends so that you can see them causally without the overhead of scheduling.
Out-of-reality People. While not as good as being surrounded by (living) fantastic people, I’ve found that reading about inspiring individuals (Benjamin Franklin, Gandhi, Shackleton) to afford similar advantages. For example, I found I was thinking about leadership principles much more in the week after reading about Shackleton’s Incredible Voyage.
Think carefully about who you surround yourself with. Your time on Earth is a valuable resource — it might merit optimizing.
The Cooperative - Wikipedia August 5th, 2018
A group of 6 French parents, including Marie Curie, took turns teaching each other's children. Emphasized STEM, self-expression, and play. And whaddya know, one of the daughters went on to earn a Nobel prize (her parents were also laureates, but still). Reminds me of Elon's Ad Astra school.

From Wikipedia, the free encyclopedia
Jump to navigation Jump to search
This article is about the group of French academics. For other uses, see The Cooperative (disambiguation).

The Cooperative was an informal group of famous French academics organized in 1907 to teach their children at a higher level than was available in Paris at the time. The group started when Marie and Pierre Curie noticed the strong mathematical potential of their daughter, Irène. Unable to find a school that could meet her needs, they joined forces with several other parents with strong academic backgrounds including Paul Langevin and Jean Perrin, and decided to take turns teaching one another's children.

The curriculum of The Cooperative was varied and included not only the principles of science and scientific research but such diverse subjects as Chinese and sculpture, with great emphasis placed on self-expression and play.[1]

Irène Curie won the Nobel prize for chemistry in 1935. 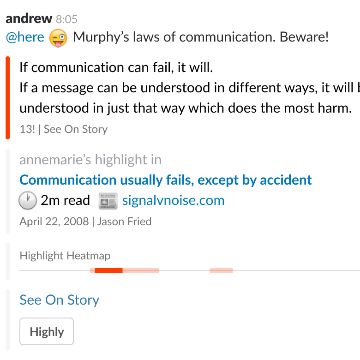 https://blog.open-agora.com/en/condorcet-voting-method/#pk_campaign=cmp10&pk_kwd=wbsite
At Open Agora, Condorcet voting system is like our Philosopher’s stone . A source of development and progress for Humankind which we try to promote through our values and products. This article will present this voting method using a concrete example. Using another example, I will demonstrate some advantages of Condorcet system when a consensus, i.e. a decision which satisfy most of the voters, is needed. This voting system was created by the French mathematician Nicolas de Condorcet at the end of the 18th century.
View More Posts →